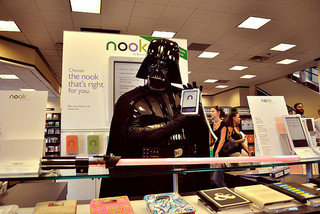 The 2012 holiday season was not good to B&N. It turns out that the initially good start never gained momentum as this piece in the NY Times tells it.

On a more positive note Pearson, the large U.K.publisher and education company, acquired a 5% stake in B&N. They are now partnered with Microsoft who earlier acquired a 16.8% share of NOOK Media LLC. NOOK Media owns B&N's hardware devices, digital bookstore and college bookstore division. Perhaps together these three companies—and others?—might be able to carve out a profitable niche in educational publishing even as the physical stores continue to shrink.

The Impact on eBook Publishers

I know of no small publishers that have had success selling eBooks on BN.com. If they do it is a handful a month. Many pulled their books after Amazon's KDP Select was launched and they continue to gravitate to Amazon.

My theory is that BN shoppers have more traditional tastes and that means books from well-known and well-marketed publishers and authors. I believe the book market is much large than what is reported by industry sources and much of that revenue goes to Amazon who refuses to share their sales numbers (beyond their cryptic “million seller club”).

BN Has Only One Business

This is reason one why they can't remain independent; all they sell are books. Apple has the high end and can charge a premium for hardware and media. They also dominate music sales. Amazon practically gives hardware away and they are also the largest online retailer in the world, AND have a profitable business in web services and soon, advertising.

Number two, the media and the public can't keep up with all this change…

Their attention span is limited so they tend to focus on far larger companies like Google, Samsung, Apple and Amazon who are in the news every day, good news or bad. The public knows and cares who they are and pays attention. B&N is in the news far less frequently and when they are it generally isn't good. So it should be no surprise that when journalists do product reviews they tend to focus on three companies: Apple, Amazon and Google….and lately Samsung.

Do you own a Nook? If you've published to the BN Nook store, how are your sales relative to your sales in other channels?
photo credit: mkephotogelis via photopin cc

Get started today, or click here to learn more.

Success! Now check your email to confirm your subscription.

Click to buy now on Amazon: available in paperback and eBook. Or click here to learn more.